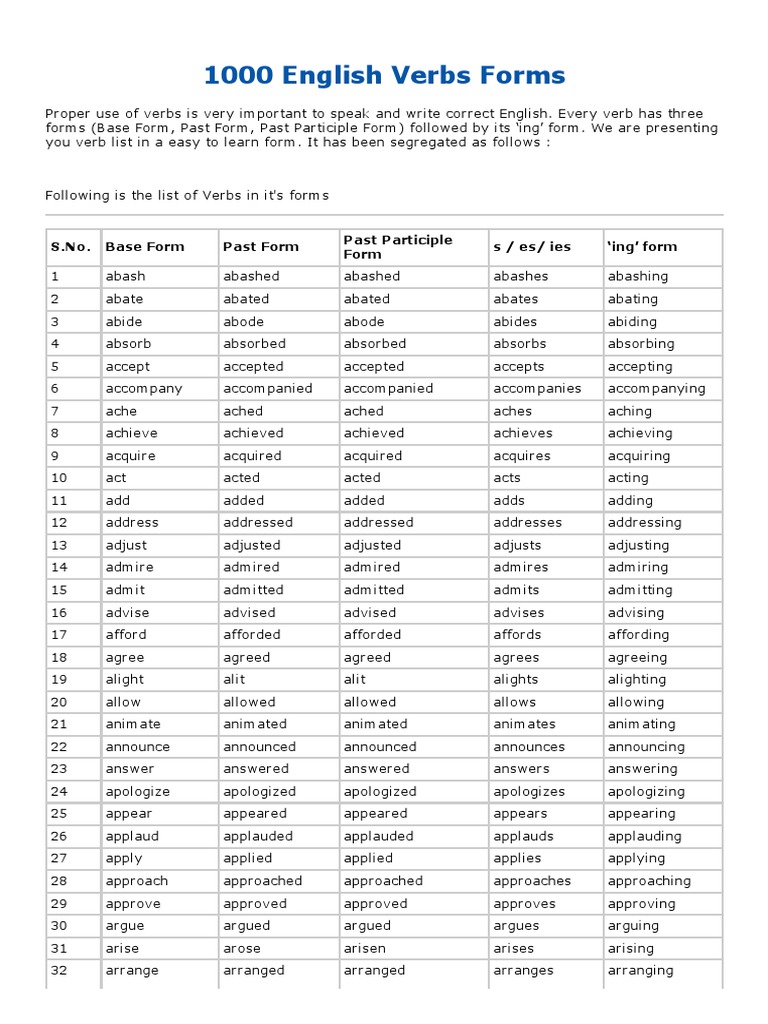 The Three Forms Of Irregular Verbs

Most of us know about verb tenses, but we tend to forget that the tenses are formed from the four verb forms. Learning the four basic forms of verbs can help us figure out the various tenses. The four forms of verbs are the base form, the infinitive form, the past form, the present participle, and the past participle. Base Form The base form is simply the verb itself. Sometimes we refer to a verb by its base form: call, toss, decontaminate. Sometimes we refer to it by its infinitive form: to call, to toss, to decontaminate. Examples: • admit • debunk • escape • swim • think • be Infinitive Form The infinitive form is identical to the base form, though in actual usage, it frequently appears with the word to at the beginning.

Name The Three Forms Of Verb

Examples: • (to) admit • (to) debunk • (to) escape • (to) swim • (to) think • (to) be Past Form In regular verbs, the past form ends in -ed. Unfortunately, there are a great many irregular verbs in English and the rules for forming their past forms are varied. Many of these verbs are common, however, and already come naturally to us. If you are unsure of a verbs past form, look it up in a dictionary. Examples: • admitted • debunked • escaped • swam (irregular) • thought (irregular) • was/were (irregular) Present Participle The present participle is always formed by adding -ing to the end of the base form. Sometimes this requires eliminating a vowel or doubling a consonant. Again, if you are unsure, consult a dictionary or other reference work. If it helps, the past participle is the form that goes with has or have. • (have) admitted • (have) debunked • (have) escaped • (have) swum (irregular) • (have) thought • (have) been (irregular) In a future article, I will explain how you can use these five simple forms to create the many verb tenses. ***** Comments? Please leave them below.