The Revenant is a Christian film, appropriating the betrayal of Christ to the frontier setting. The title of the film means resurrection and it is most glaringly referencing Christ’s ascension when Glass survives after nearly being buried to death. Inspired by true events, “The Revenant” is an immersive and visceral cinematic experience capturing one man’s epic adventures of survival and the extraordinary power of human endurance.

The Revenant falls into the same category as Aronofsky's 'Requiem for a Dream' and Spielberg's 'Schindler's List' for me, in the essence of being a terrific movie but not something I think I can sit through a second time. In all these movies there are brutal sequences that cause emotional stress and disgust just watching because it is so REAL and GRIPPING. To think that events in these movies actually happened or that they could very well happen is too much for me to think about. Not to say that I did not enjoy this film thoroughly. 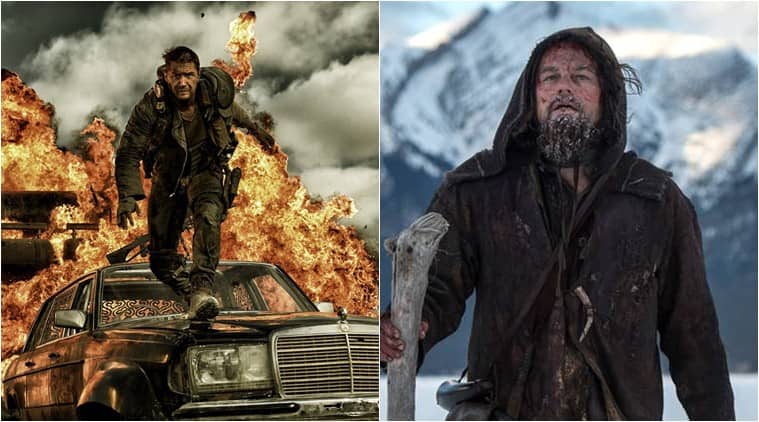 The Revenant is a technical masterpiece that left me wondering 'How the hell did they do that?' After many scenes and sequences. With beautiful cinematography and adroit camera movement this film is a visual magnum opus. It is apparent that the great minds that put forth this film are none other than the same ones that brought us Birdman: Lubezki and Inarritu. There are many long shots without cuts that are sprinkled throughout the film that add a sense of sophistication to it with the added bonus of predominantly location based shooting and natural lighting for the film, that can even make a novice film watcher raise an eyebrow at its complexity.

The camera work is not the only noteworthy aspect of the film; The actors did a superb job executing their rolls. Many are raving about DiCaprio's performance but I was more of a fan of Hardy's brutal and gritty character Fitzgerald.

Granted, half the words that came out of his mouth were unintelligible but he left no doubt in my mind that he was fully devoted to his role and bringing Fitzgerald alive instead of just Hardy playing a character named Fitzgerald. He was simply amazing. With all this said, there are still flaws in the film.

At some points it was dragging on and moving too slow. It gave the impression that the film itself was cocky and wanted to show off all of its beautiful scenery and camera work too much. Then there was the 'he shouldn't be alive' situations.

Hugh Glass was a real guy that really did survive a bear mauling but in the film they make this guy practically immortal. There were too many instances where I was thinking 'he should be dead three times over right now, for me to enjoy the film as much I should have.

All in all a great film that I only recommend to seasoned and mature film viewers. The natural landscape and some of the scenes are overwhelming and spectacular! The camera-work is so immersive, you believe are a part of Hugh Glass' journey through the wilderness and back to civilization. Also with great performances not only by DiCaprio, but also Hardy, as the unsympathetic fellow fur trapper leaving Glass behind.

Story-wise, it is a bit thin for a 156 min picture. Glass' quest for vengeance is sometimes lost as he utters few words about his drive and is being more or less, chased himself. The story arc of the Indians quest for their daughter felt a bit out of place and strange. We also get to see the fur trappers p.o.v. That left Glass behind and the Captain way ahead of them.

Which in my opinion takes a little bit of the magic of Glass' total perilous journey. All my stars goes to the beauty, production value and performances alone!

Regardless, this is one of those overlong movies one like, but would not sit out for another viewing! Go and see this movie.

In the cinema. As soon as possible.

Simply put, it is an excellent story of family, revenge, survival, and nature. The Revenant is one of the most beautifully-shot films I have ever seen. I lost count of how many scenes I sat there in utter amazement, which is undoubtedly due to the brilliant directing and spectacular cinematography: there's no shaky-cam, no quick-cut editing, and a lot of incredibly complex shots which appear to have been completed in a single take.