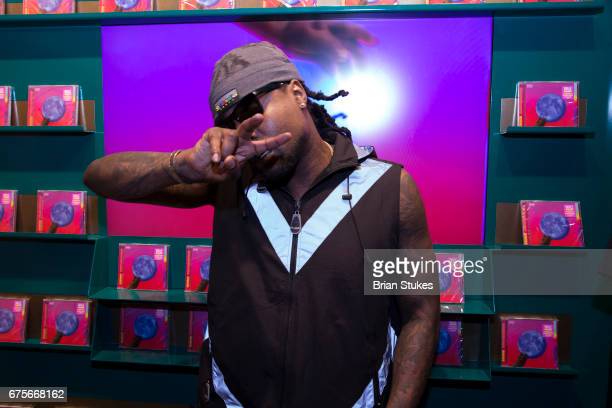 • • • • • • • • • • • Website Olubowale Victor Akintimehin (born September 21, 1984), better known by his stage name Wale ( ), is an American rapper. He first rose to prominence in 2006, when his song 'Dig Dug (Shake It)' became popular in his hometown. Wale became locally recognized and continued recording music for the regional audience. Producer discovered Wale in 2006 and signed him to in 2007. While signed to that label, Wale released several mixtapes and appeared in national media including MTV and various Black-American-focused magazines.

A song called 'Ridin' in That Black Joint' was featured in the popular video game 's soundtrack in 2008. In 2008, Wale signed with for $1.3 million, and his debut album was released in 2009 with the singles ', ', and '. The album, although under-shipped, received positive reviews from critics. In early 2011, Wale signed with Rick Ross', where members of the label released a compilation album, on May 23, 2011. His second studio album, was released November 1, 2011, with mixed reviews. His third studio album,, was released on June 25, 2013, to mainly positive reviews; it debuted at number one on the. His second Billboard number one album was released on March 31, 2015.

In 2018, Wale released three E.Ps titled It's Complicated, Self-Promotion and Free Lunch. Wale and fellow rapper in 2009 On June 19, 2009, Wale released his fifth mixtape, Back to the Feature, on which eleven of the tracks were produced by, with contributions also coming from and others. The social network full movie online.

The album's title, a play off the name of the movie, referred to the fact that a lengthy list of rappers joined Wale on the songs, including, Tamere Guess,,,,,. Panduan lengkap ms project 2010 bahasa indonesia pdf download. The mixtape received positive reviews from Vibe magazine and website, but Colin McGowan of Cokemachineglow commented that it represented neither 'a step forward or back [for the artist] so much as shouting-in-place. ' Wale did a guest performance on ', a song by the Australian singer-songwriter. It was written by Merriweather and and produced by Mark Ronson.